Charlotte Gets Ghosted is the fifteenth episode of the fifth season of Henry Danger. It premiered on March 16, 2019 to an audience of 1.06 million viewers.

Jake finishes his party, which he threw at his living room after being "promoted" from project manager to junior project manager. Jake tells Henry and Piper they need to help clean up, but Henry invokes the chore wheel. Piper spins a wheel of chores and her chore is to eat ice cream. Henry spins it and his chore is to clean the house. He calls Ray and says he's late for work because he had to clean the house. Ray says he can use Schwoz's Super Sucker, a vacuum cleaner that can shrink objects to the subatomic level and into the cleaner. Ray and Schwoz launch the Super Sucker to Henry's house and he uses it to clean up the party. However, as he cleans, he accidentally sucks Charlotte into the vacuum cleaner. Jasper sees this and freaks out and the two start trying to get her out of there.

Henry hits the "unsuck" button but the vacuum breaks. Charlotte tells them to get her out of there, and Jake, Kris, and Piper hear this. They ask why the vacuum was talking, and Jake believes the vacuum is haunted. Henry agrees with the explanation and makes Charlotte play along, and she starts pretending to be a ghost in the vacuum. Piper decides to take this opportunity to become internet famous, as they could get a ghost catcher and take a video of them removing the ghost from the vacuum cleaner. Henry says they should get his boss for this because he was an amateur and would do it for free. Henry calls Ray and tells him to come and pretend to be a ghost catcher. He also tells Schwoz what happened, and Schwoz says to get the broken parts of the vacuum cleaner and meet him in Henry's room. Ray launches himself to Henry's house and starts to pretend to be a ghost catcher while hitting on Kris at the same time. Henry brings the vacuum cleaner parts upstairs and Schwoz fixes it. Jasper goes upstairs to check on them and Schwoz gives it to Henry. He tells them he couldn't fix the cooling system so the vacuum would melt or explode in four minutes. Henry needed to attach the vacuum to the other part of the cleaner so that Charlotte could get out. Jasper drops it due to the heat, and Schwoz says now they have two minutes.

Schwoz gives Henry oven mitts so that he can hold the vacuum. He goes downstairs and Jasper tells everyone to close their eyes. Ray catches on and tells everyone to close their eyes before the ghost comes out or it would steal their soul. Everyone closes their eyes and Henry attaches the vacuum cleaner. The trash starts blowing everywhere and Charlotte goes flying out as well. She runs out of the house and Henry zaps Piper's phone so that there was no video of what happened. The vacuum explodes and they realize the place is a bigger mess than it was at the beginning. Jake invokes the Chore Wheel. 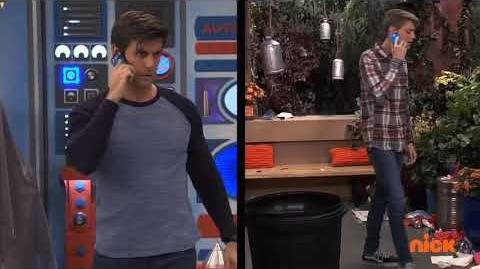 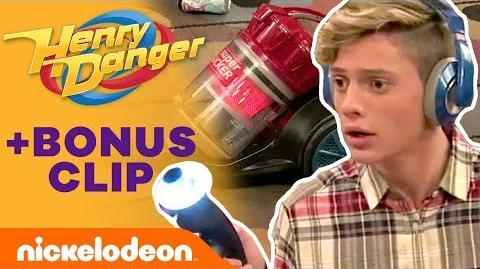 Charlotte Gets Sucked Into a Vacuum⁉️ Henry Danger Nick
Add a photo to this gallery
Retrieved from "https://henrydanger.fandom.com/wiki/Charlotte_Gets_Ghosted?oldid=125598"
Community content is available under CC-BY-SA unless otherwise noted.