Christmas Danger is the ninth episode of the second season of Henry Danger. It premiered on November 28, 2015 to an audience of 1.62 million viewers.

While decorating the Christmas tree at the Hart's house, Henry and Charlotte are worried about Captain Man. Henry puts two goldballs together in the Christmas tree and Charlotte says that he can't do this because the pattern goes redball, goldball. Jake keeps playing his handbells that he found in the attic for two hours and whenever Kris, Piper and Henry are talking, he keeps playing the bells. Jasper comes over and shows Henry, Charlotte, Piper, Kris and Jake more 'stupid' laws. Jake wants to play his bells but no one wants him to. Whenever someone was reading a law, Jake would play his bell. These stupid laws include wearing two hats at once, biting ice cream on a cone and taking a picture of a rabbit without a permit. Piper makes up a law that Jake's handbells were illegal but Jake knows it is fake. Henry, Charlotte, Piper and Kris think that it should be a law. Jasper then proceeds to commit these dumb crimes in an attempt to free Captain Man. Jake wants everyone to listen to his handbells but Henry, Charlotte, Piper and Kris leave and don't want to listen. At the jail, a convict named Harold goes to jail. Harold is mad and starts crying because he has no hair. At city hall, Henry, Charlotte, and Jasper arrive and Jasper wears two hats at once, bites ice cream on a cone and takes a photo of a rabbit without a permit. His plan backfires, and he is arrested as well. When Jasper finds out he is gonna be in a cell with Captain Man, he becomes amused. Henry and Charlotte realize that Jasper will be annoying Captain Man, so Henry commits the same crimes as Jasper and he is arrested. They arrest Charlotte as well for being a bystander and not doing anything, making her a victim of circumstance.

At the jail, Harold tells Captain Man his story about his hair falling out. Captain Man sees that Henry, Charlotte and Jasper have come to his cell and is glad at first. Jasper annoys Captain Man. Charlotte is angry that she has to be in a cell with all men. The cops put Charlotte there because the womens' cell was full. Captain Man wants Jasper to talk to Harold and he asks Henry and Charlotte what the plan is and they say that they don't have a plan for him to get out of jail. Captain Man asks why they are here. Henry says they are here to keep him company and so Jasper won't annoy him. Jasper cheers up Harold. At the Hart house, a police man arrives and tells Kris that putting two goldballs together was against the law. Kris said she was going to put the two goldballs with a red ball in between it. The police man then tells Kris that her child has been arrested. She freaks out because she thought Piper was in jail and yells for Jake. He comes down and hears the same news as Kris. He also freaks out for the same reason. Kris then says she thought that Piper would be at least sixteen before she got arrested. Piper then walks through the door, coming from Christmas shopping, and maxed out three credit cards. The police man tells Kris and Jake that Henry was arrested. Kris and Jake start panicing, while Piper is overjoyed. The police man tells them that Henry got arrested for wearing two hats at once, biting ice cream on a cone, and taking a photo of a rabbit without a permit. Kris and Jake tell the policeman that they want to talk to the judge to change the laws and visit Henry's jail cell. The police man says the judge will be back in January. Kris and Jake wonder what to do, so Piper whispers something to them. Kris then grabs the policeman's walkie-talkie and throws it into the fire in the fireplace. Jake then pulls down the officer's pants. Kris and Jake then get arrested. Piper is very happy and calls her friends to have a Christmas party at her house. At the jail house, Captain Man flirts with Kris. Charlotte is mad that she is in a man's jail cell and that there are no tissues in the cell even though it said it. Kris said she went here so Henry can spend Christmas with her. Captain Man says it is not that bad because everybody is here. Kris says Jake is not there. Henry asks Kris why Jake is not in their cell. Kris says that Jake pantsed a cop and that's a Class One Misdemenor, so he was put in a different cell. Jasper said that Jake got locked up with the extra dangerous criminals and Captain Man is amused. At the other cell, Jake is with the criminals. He tells them he is in there because he pulled a cop's pants down. Jake sees a criminal is playing with a spoon and he thinks of the handbells. Henry, Kris, Charlotte, Captain Man, Jasper, and Harold are moping how it does not feel like Christmas. Jake then gets spoons and he and the other cellmates play with spoons to the tune of Jingle Bells. Henry, Kris, Charlotte, Captain Man, Jasper and Harold listen to it and they then start singing and dancing to it. At the Hart house, Piper has a Christmas party with her friends. 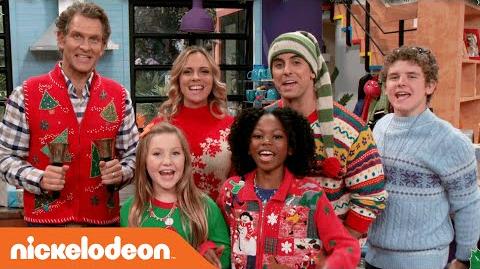 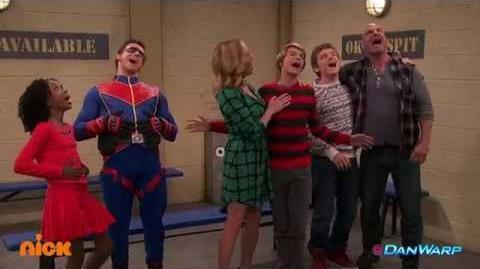 Henry Danger Jingle Bells in Jail!
Add a photo to this gallery
Retrieved from "https://henrydanger.fandom.com/wiki/Christmas_Danger?oldid=112586"
Community content is available under CC-BY-SA unless otherwise noted.