Kid Grounded is the twenty-first episode in Season 1 of Henry Danger. It premiered on April 4, 2015 to an audience of 1.58 million viewers.

Henry and Captain Man are getting babies out of a sewer, as a woman had given birth in there. As Henry is getting them out, Captain Man asks the woman who gave birth if she really thought it was a good idea. The woman explains that that was how they did it where she came from (she had also come from the sewer). When Henry gets all the babies out of the sewer, Captain Man sends Henry home. Henry sneaks in and it is now one in the morning. When Henry opens his closet, he finds Piper in there and she scares him. She asks why he was sneaking in so late. Henry claims that he was moon bathing, and he now had a moon tan. Piper says she would tell Kris and Jake, but Henry tells her not to tell. Piper eventually agrees, but later, she tells on him. Then, Henry tells on Piper for watching "French Basement", an R-rated movie. Henry and Piper get grounded for two weeks.

Schwoz makes a flower and tells Ray to sniff it. He does, but it then explodes. Charlotte comes and then, Henry hologram-chats them. He explains to Schwoz, Ray, and Charlotte that he couldn't be working for two weeks, because he was grounded and said that his parents are only letting him to go to school, that's it. Schwoz wants to fill in for Henry as "Schwozzam", but Ray doesn't want this. Ray had wanted Henry to get ribs, so Charlotte gets Ray ribs. Piper is angry with Henry for telling on her and as he is reading on the couch, she takes the couch and throws it back. Jasper arrives and brings the couch back up. He says he wanted Henry to help him make life hack videos. Henry doesn't really want to do this. Jake arrives and asks what a life hack is. Henry explains that it was a quick fix to a problem. Jasper says for example, if he needed to pee and there was no bathroom nearby, pee in a jar. Jake goes to take a walk and Jasper gives him a jar to take with him. Jasper makes Henry film the videos. Jasper's first life hack is that if you run out of toothpaste and you need to brush your teeth, just put mayonnaise, mint, and sand in a blender and use it to brush your teeth. As Jasper demonstrates, he realizes it tastes awful and tells Henry to turn off the camera. Kris and Jake are being interviewed by Elaine Morongo and Parnell Chewmash, who were in charge of SwellviewToday.com. They were trying to win Family of the Week and if they were, they'd be featured on the home page. But then, Piper runs in and closes the door before Henry walks in. Henry and Piper are arguing and Piper goes upstairs. Jake claims that they don't really talk to each other like that, and they were rehearsing for a play. Elaine knows they're lying. Jake tells Henry to go upstairs to donate his allowance to poor people, "as he often did." Then, Piper begins watching a movie and she turns her volume to the highest. Henry steals the remote and runs downstairs, with Piper running after him. Elaine and Parnell lie and say they were late for another meeting and Jake knows they're lying. Henry says it isn't their fault because they'd been cooped up in the house for five days and they couldn't take each other anymore. Kris and Jake say that if they can go a full day without arguing, they're ungrounded, but if they did argue, they would be grounded for a month. Henry and Piper immediately start pretending to be nice to each other.

Piper walks into Henry's room and takes his phone cord to charge her phone. Henry says he needed it to charge his phone. They begin arguing, but then Kris walks in. Henry and Piper pretend to be reciting bible verses. Piper then cuts the phone cord in half and throws a halve to Henry. Charlotte arrives at Henry's bedroom window with Yotally Togurt Fudge Blast. Charlotte tells Henry that she went on patrol with Ray in the Man-copter. Henry is angered by this and accuses Charlotte of trying to steal his job. Charlotte asks if she really thought she would try to steal his job as Kid Danger. Henry then realizes she's right and he'd never be replaced by a girl. Charlotte is offended by this and Henry quickly changes it to young woman. Charlotte says it's the same thing. She takes Henry's fudge blast and throws it out the window. She says she wasn't trying to steal Henry's job before, but now she might. Ray and Schwoz find out about an illegal pig farm on the south side of town. Charlotte wants to fill in as Kid Danger and Schwoz gives her Henry's backup bubble gum. Charlotte and Ray transform into Captain Man and Kid Danger and go up their tubes. Jasper comes in with a dog and another life hack: if you have a vicious dog, and you're going to take him for a walk with no leash, get your mom's bras and tie them together to make your own leash. Elaine and Parnell come back to continue their interview and then, the bra leash snaps off and the dog chases them out of the house. Right about then, the 24 hours expires and Henry goes to the Man Cave. Schwoz puts down a tarp under the tubes because Ray told him to. Captain Man comes back down. He says Charlotte was amazing today. The farmer had saw them coming so he tried to run away, so Charlotte gets on the big pig and starts riding him toward the farmer. She caught up with him and tackled him. Then, Charlotte arrives covered in pig slop. That was why they needed the tarp. Henry tells her that since she rode a pig and tackled the farmer, she could do his job. Charlotte says she doesn't want to do his job. Henry asks Charlotte if she forgives him. She said she will after they hug, and she gives Henry a hug while being covered in pig-slop. She goes to take a shower. Schwoz takes a picture of Henry and Henry tells Captain Man to spank him and he starts chasing Schwoz around the room, spanking him. 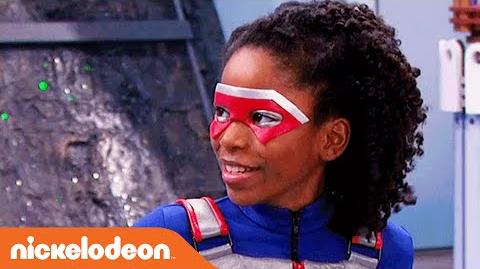