Start a Wiki
watch 01:32
The Loop (TV)
Do you like this video?
This is a list of all gadgets that appeared in Henry Danger. Most of these gadgets are possessed by Captain Man and Kid Danger. They are listed in alphabetical order.

A machine that attaches to heavy objects to make them weightless. It was used in Grave Danger to lift the casket of the presumed deceased Brad. It was also used in Captain Man: On Vacation.

A sleeve and pair of goggles used to enhance a persons skills in Basketball. This was used by Henry in Too Much Game.

A special gum that instantly changes Henry Hart and Ray Manchester into their Kid Danger and Captain Man uniforms.

A box that contains a DVD and a juice bottle. As Piper wanted to be big and strong, she decided to watch Captain Man's training video, and drink the body juice, leading to her turning into a beast. Henry warned Captain Man that it was a bad idea. Captain Man most likely got rid of the products.

Gooch's flame thrower that was used in Tears of the Jolly Beetle to test Ray's invincibility.

A communications application that allows Captain Man to call Henry on his Whiz Watch.

A special weapon design to look like a hotdog. It shoots a laser from it that can stun a crimminal. It was seen in Captain Jerk.

A bright, powerful beam of light that can cut things. It can also knock people out (or kill them). The color of the laser varies from green to red, with one setting varying from stun to kill respectively.

Not to be confused with the aforementioned laser zapper, the laser gun was most likely invented by Schwoz, that fires yellow laser beams. It was used by Captain Man to "kill" the alien that was attacking the Hart home.

Used to break apart very strong materials, they were used in Danger & Thunder when Captain Man was trapped inside a block of cement.

Placed parallel to the eyesight of the wearer, these cameras can scan faces of people to know if they are criminals or not. A file on the scanned person is sent to the Man Cave's computer for evaluation.

A small gadget that can fire a laser. Its intensities vary between stun and kill. It is often attached to Captain Man and Kid Danger's wrists.

The Memory Eraser machine is a device that is used to erase people's memory. It was used by Captain Man on Ortho and his dad in Substitute Teacher, when they plan to report kidnapping to the police and on Piper's customer in I Know Your Secret, when he was about to text people Kid Danger's secret identity.

The Man Cave's control panel that is connected to multiple large screens, it is used by Charlotte most of the time to research information. It can also stream TV and video feed.

Used in Danger & Thunder when Kid Danger, Captain Man, and Phoebe Thunderman were under cover in the secret underwater lair. In order for the camera to see the wearer must be smiling.

Tubes that transport Kid Danger and Captain Man to their desired location by propelling them upward with strong wind. It can also be used as a prison as seen in The Beat Goes On when Charlotte was hypnotized by Dr. Minyak to kill Henry and Ray.

A Glove that shoots Tranquilizer Darts that carry enough hippo grade Tranquilizer to knock a person out cold.

In costume, both Captain Man and Kid Danger can hold multiple items and gadgets in it such as phones, weapons, or snacks. Tapping the symbol on the buckle causes the wearers transport tube to come down.

It was seen in The Beat Goes On, which Henry used to destory the wireless camera that Minyak sent.

An electronic arm band that beeps and flashes when Captain Man need Henry's assistance. It self-destructed when it was replaced by the Wiz-Watch. 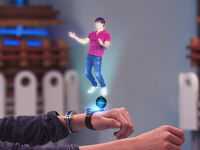 A multi-functional watch that replaces the Whiz-Band. It can also holographically display the person the user is talking to.

Retrieved from "https://henrydanger.fandom.com/wiki/List_of_gadgets?oldid=114580"
Community content is available under CC-BY-SA unless otherwise noted.