My Dinner With Bigfoot is the fourteenth episode of the fifth season of Henry Danger. It premiered on March 9, 2019 to an audience of 1.08 million viewers.

Henry, Charlotte, Ray, and Jasper are doing a haircut chain. As Henry is talking, he stops paying attention to cutting Jasper's hair correctly and ends up cutting too much off. Schwoz enters and Henry asks if he can regrow hair. Schwoz gives Henry a hair regrowing can, and he goes to the tube to have dinner with Bigfoot. Everyone is surprised to hear that Schwoz knows Bigfoot, and Schwoz claims Bigfoot dated his sister. They ask if they can go with him, and Schwoz agrees. Everyone arrives in a forest and after a few minutes have passed, Bigfoot shows up.

Bigfoot starts talking with the rest of them, recognizing Henry, Charlotte, and Jasper from when Schwoz told him about them. However, he doesn't recognize Ray at all, angering him. They invade Mitch Bilsky's camping site and stay there, where Ray remains upset that Schwoz didn't tell Bigfoot about him. Bigfoot tells them about a hunter, S. Thompson, who was dedicated to trying to find Bigfoot and trap him. He had set traps all over the forest. Ray walks around and gets trapped in all of Thompson's traps, but consumes the bait anyway. Thompson is interviewed on the news, and upon finding out that Bilsky had encountered Bigfoot that night, he exits. Jake and Piper are watching the report and Piper says she wants to find Bigfoot so that she can get a check next to her name on social media. Captain Man and Kid Danger create a trap to trap Thompson before he can trap Bigfoot. They step onto the trap to explain to Bigfoot how it worked, but Thompson arrives. He pushes a button, activating the trap, trapping Kid Danger, Captain Man, and Bigfoot inside.

Captain Man tries to laser his way out of the trap, but the trap is made of steel, so the laser just ricochets and hits Bigfoot's arm. Henry notices the bald patch looks like human skin, so he proposes shaving Bigfoot so that he just looks like a regular guy. Thompson calls the news and tells them he had trapped Bigfoot. Piper and Jake are looking in the forest for Bigfoot. Jake rubs tree sap on himself to avoid getting bug bites and starts to eat moss. Piper looks it up and finds out the moss is toxic. Jake spits it out, but it starts to have a weird effect on his body. Piper gets an alert saying Bigfoot had been trapped. Jasper, Charlotte, and Schwoz are getting more pine needles to cover the trap when Piper runs past, saying Bigfoot had been caught. Jake runs into Schwoz, who is holding the pine needles, and the needles stick to him. A crowd gathers around the trap and Thompson opens the trap. However, they only find Captain Man, Kid Danger, and a regular-looking person. Then, Jake runs in, roaring with needles all over his body. Everyone believes Jake is Bigfoot and starts running after him. 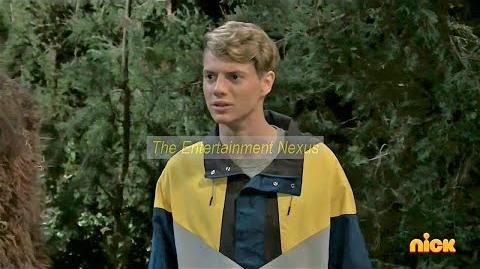 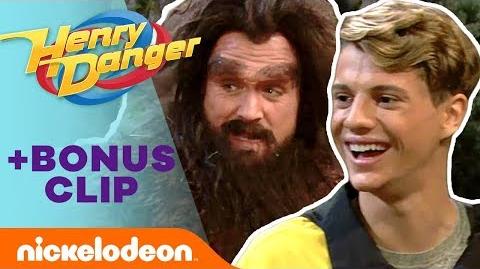 Henry Finds Out Bigfoot is Real?! 😱Henry Danger Nick
Add a photo to this gallery
Retrieved from "https://henrydanger.fandom.com/wiki/My_Dinner_With_Bigfoot?oldid=125597"
Community content is available under CC-BY-SA unless otherwise noted.